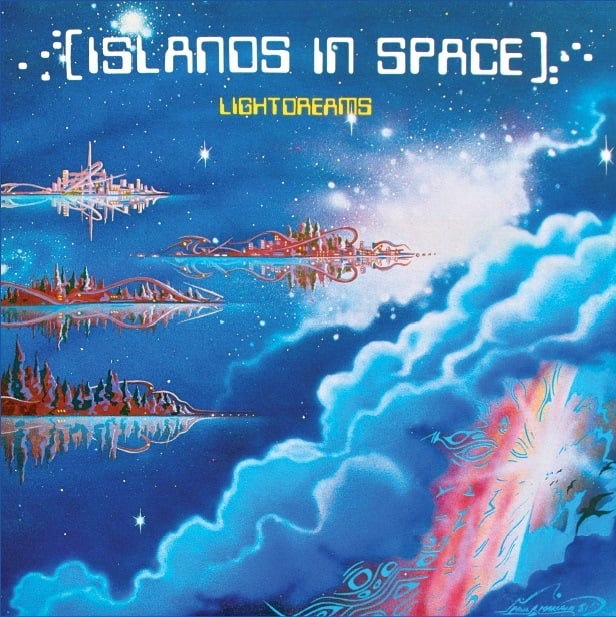 **NOW SHIPPING, the SPANISH IMPORT LP & CD Editions of LightDreams' Islands In Space—choose STANDARD or BONUS Editions (which include custom buttons & prints) below, Limited to 66 Packs.**

Purchase options appear in pull-down which appears after 'by LightDreams', clicking 'Add to Cart' purchases BONUS CD Edition. Shipping rates are flat-rate, as the cart system won't allow variations per product, but any excesses will be refunded to buyers.

“…we can make [enough] progress inside our heads and the heads of our friends to lay the foundations of an intergalactic life more meaningful than our earthbound condition…” – John Peel, International Times

Mirroring the sentiment of the prescient UK radio legend in his Vibrations column for the International Times in the ‘70s, LightDreams leader Paul Marcano took one further step beyond his intimate colleagues and chose to spread his ideals concerning peaceful outer space colonization to all with open ears. Islands In Space, dotted with acoustic jams, backwards guitars, lyrics alluding to the British progressive era, smoking hot electric leads, synths galore, and the dreamiest of melodies, is both Marcano’s love letter to the work of physicist/space activist/author Gerard K. O’Neill and the psych-tinged folk explorers who came before him such as McDonald & Giles.

Originally privately-issued in 1981 in an edition of 1,000 copies, Islands In Space explores space travel and cosmic ideology making for a sci-fi psych odyssey and is filled with atmospheric, lysergic creations atop a hybrid of sounds from the cosmic-psych/progressive-folk/New Age spectrum. Home-recorded (yet hi-fi), Islands In Space carries a singular quality, defies easy categorization and has long been savored over by collectors of otherworldly joys.

Got Kinda Lost Records is absolutely ecstatic to allow this singular, beatific work another chance to shine from Earth’s surface to the outer reaches of the galaxy.

“The album’s free floating dreaminess is grounded in solid songwriting and impressive arrangements, [making Islands in Space] one of the better albums from the era; consistent, talented and transporting in a friendly psychedelic way.”– Patrick “The Lama” Lundborg (The Acid Archives)

• First time reissue of this under-the-radar masterpiece, with remastered sound.
• Recorded in 1981 while having more in common with ‘60s and ‘70s psych and folk innovators, providing the album an “out of time” quality.
• Insert features full lyrics, rare photos and informative liner notes by collector Jack D. Fleischer culled from interviewing the artist.
• LP housed in an old-school-style tip-on sleeve.
• CD edition features a full-color insert.