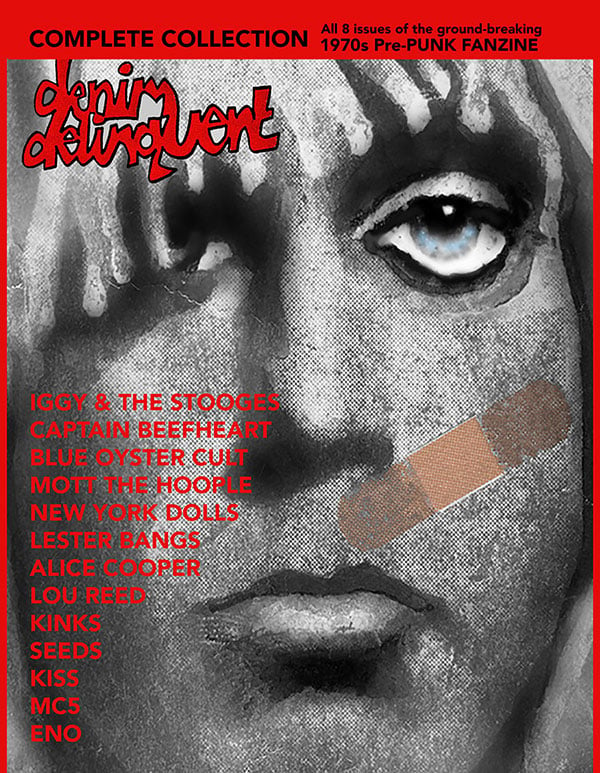 With all due respect to every project I've been attached to and every person I've spoke with in pursuit of them, perhaps my greatest joy—second only to helping bring Patrick Haggerty/Lavender Country back into the world—comes from aiding in the foisting of my good buddy "Slippery" Jymn/Jim Parrett's '70s fanzine compendium/tome on the world in cooperation with HoZac Books, with new content edited by yours truly...

Hold on folks, HOZAC BOOKS has unleashed another edition: the DENIM DELINQUENT 1971-'76 fanzine compendium has RISEN and will be shipping shortly. As one of the rarest homemade publications of the nascent DIY and proto-punk tornado looming on the horizon in the early 1970s, this groundbreaking and undeniably PUNK magazine encapsulates the innocence and excitement of running your own ship, and draws a clear outline of where underground music journalism needed to go during a time when all kinds of styles crashed together with sickening and shocking results. DENIM DELINQUENT is your ticket on that ride, a hard rock trip down a far-out tunnel, or a proto-punk prognosis, you decide.
We are very excited to present to you, the first-ever official DENIM DELINQUENT fanzine compendium, the legendary monolithic bastion of proto-punk journalism. Quite possibly the equivalent of the ‘Dead Sea Scrolls’ of modern punk fanaticism, and one of the rarest self-produced publications to emerge from the pre-DIY years of the early 1970s. It’s such a shame how few sets of eyes have seen these primitive pieces in real life, and that’s why it was nothing short of prerequisite to forge this book into reality, which will undoubtedly set the clock back a few years on the standard “punk” timeline. We couldn’t be happier to see the free-form intertwining of heavy rock, proto-punk, and primitive power pop represented with such unbridled enthusiasm, in a time before it was compartmentalized, commodified, and repackaged for the suburban teen market. DENIM DELINQUENT is a true gem of unadulterated punk amateurism, condensed into an incredibly hard-edged slice of the early '70s you can immerse yourself in without pretense or punditry, a true pioneer of the underground press culture right at time in rock history where anything was possible, and the open-ended creativity ran wild.
As they say, some of the most far ahead-of-its time music came from this early-mid ’70s era, and as the rest of the music world sat idly by and waited to be spoon-fed their mellow mediocrity, some real adventurous wild rockers were right there lapping it up as it was happening in real-time, and the founder/editor/publisher Jim Parrett just so happened to fit this profile. Scientists and physicists can keep toiling away at trying to build time machines, but for us, there’s no better vehicle for slipping into another time and place than when you are flipping through the pages of underground magazines like DENIM DELINQUENT. The band illustrations are miniature masterpieces, and the writing is highly infectious, as any good fanzine should be—100% driven by genuine excitement and a bleeding desire to SPREAD THE WORD. Happening across original copies of the magazine would be instant recognition of museum pieces, so we’re proud to present this North American cultural artifact complete with all of the rough edges intact, and with that irresistible and unmistakable excitement literally bleeding off the edges of each page.

The handover of rock’n’roll from the ‘60s to the ‘70s was not an easy one. Some little goofs hung on to the monumental cultural shifts begun by the Beatles with a fervor that defied reason. Sure, the music and culture of the pre-punk ‘70s had its spectacular moments, but too often even those seem to have been riding the last monster wave of the raw excitement, unexpected greatness, and explosive fun of the decade that preceded them. With the dawning of the new decade, rock writers had come into their own, fashioning an industry that catered to their particular tastes. These scribes were first and foremost readers and writers; lyrics to them were the holy grail. In most cases that frustrated those of us who had grown up celebrating the thing that makes rock’n’roll the greatest—guitars levitating to the max, outrageous musical turns and miscues, endless humor, and most of all… fun, fun, fun. What we wanted to know is how does it feel, not the existential meaning of “…kick out the jams, motherfucker!” Anybody who had grown up in the ‘60s already knew the answer to that. In essence, much of the rock press had become an incestuous clique, tone deaf to everything that made rock’n’roll great. Into this vacuum of rock’n’roll writing, fanatics had to do something. So they did what all rock bands have done for themselves—make their own, and hope someone picks up on it.
Like many other rockers of this era, Mark A. Jones and myself—both of Ottawa—decided to bring back some of the admittedly amateurish glee of the music that helped kick start our lives. Beginning as a local rag unsure of what it was, DENIM DELINQUENT piled on the amateur, having a ball, never stopping to think or reason. It was all a blur of beer and pot, nights of headphones turned to max, air guitars out the wazoo and the desperate outreach to others who were doing the same thing. Thanks in large part to Bomp!’s phenom Greg Shaw, others were reaching out with fanzines of their own, fueled by an uncompromising love of rock’n’roll. It was through Bomp! that dozens of zines were publicized and a loose network of like-minded individuals could finally find others on the same crooked path. What you have in your hands is one such fanzine, caught between the juggernaut of the British Invasion and the rebellious glee of punk. Laugh all you will at the youthful bravado, the amateurish execution, the innocent exploration. These zines were dedicated to one thing, celebrating the thing that made our rock’n’roll lives eminently livable—that brief, indescribable moment where rock’n’roll could really save one’s soul. Don’t judge the contents of this compendium too harshly folks, it was done out of love and commitment… and a whole lot of idiocy.
—Jim “Jymn” Parrett (founder/publisher)