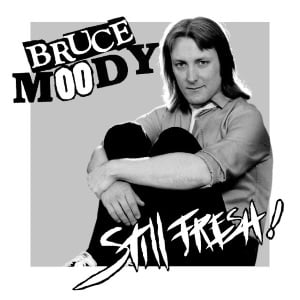 Last year Meanbean brought you a deluxe reissue of arguably the best US powerpop EP ever pressed to vinyl: Bruce Moody’s Fresh Out! [featuring liner notes from Got Kinda Lost founder/all-arounder, Jeremy Cargill]. After playing it a few times though, astute listeners must have been left wondering just what the deal was with the ten second song snippet which punctuated the radio skit serving as an intro to the leadoff track “AM Romance.” Did Bruce record more than just the four songs contained on his debut EP? If so, did he still have the tapes sitting in a box somewhere thirty-plus years after they were recorded? And even if these tapes could be found, would they live up to the standard set by Fresh Out!? It turns out the answer to all three of these questions is a resounding yes! Meanbean is beyond stoked to present Still Fresh!: four top shelf powerpop hits which have thankfully been saved from the dustbin of history. Kicking off with the Who-inspired quasi-psychedelic powerpop of “Survival”—the song featured on the Fresh Out! intro—all four songs on this record are loaded with the whip-smart pop hooks one would have expected had Bruce produced a follow-up EP in 1983. Although that EP may not have come to pass in real time, Still Fresh! is proof positive of the truth in the old adage “better late than never.” This one is a must for anyone who loves classic powerpop!
(Limited to 300 copies with insert containing lyrics and Bruce very own liner notes.)